Do not pulp our climate 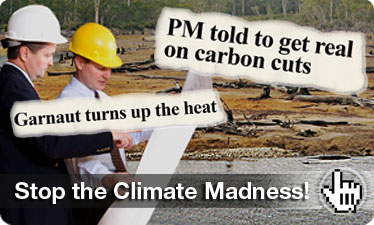 You may have missed it, but the Tasmanian Government last week unbelievably signed an agreement handing over Tasmania's forests to the Gunns pulp mill for the next 20 years - in the very same week Professor Garnaut warned them of the dire climate change consequences facing us.

If we don't act now, bulldozers will start clearing land for the mill that will contribute 2% of Australia's greenhouse emissions - at a time when we're being told we need to drastically cut our emissions. But unfortunately Australia's forests were largely left out of Garnaut's recent interim report.

We have only one opportunity to put them in the picture. A proper assessment in his impending Climate Change Report of our native forests' climate change value may just sink the mill project. Click here now to sign the petition asking Professor Garnaut to examine the full climate impact of this mill madness and the logging of Tasmania's native forests.

World Society for Protection of Animals

More than one million people worldwide have signed  the  WSPA  Animals Matter petition for a Universal Declaration on Animal Welfare at the United Nations.

Every country in the world is now represented on the petition.

The Australian government has appointed a representative to liaise on this issue to help integrate animal welfare into the UN agenda. This is another
great step forward towards a Declaration that will help protect all animals, everywhere.

Please sign  the Animals Matter petition to help make the Declaration a reality. Go to the link below: 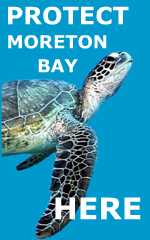 Please help Moreton Bay's threatened marine wildlife today. Give 5 minutes of your time to sign this online letter to the Minister for Sustainability, Climate Change and Innovation asking for greater protection in the Marine Park, then forward to your friends and family.

Over the summer the Queensland Government released a draft zoning plan for Moreton Bay, earmarking a mere 15% protection in Marine National Park zones. These are areas where we are free to enter- to swim, boat, dive, and snorkel - but where all wildlife is safe from harm.

While 15% is better than the current protection of less than 1%, it does not go far enough for our threatened wildlife.

Marine scientists around the globe say that it is critical that at least 30% of all ocean habitats, such as seagrasses and corals, are given Marine National Park status. Our chance to support our turtles and dugongs is closing fast. Public comments were due by 5pm Friday 7 March 2008.

Moreton Bay Marine Park is only reviewed every ten years, so this is a once in a decade opportunity.
Click here!

With overwhelming public support we really do believe that the Government will provide more than just a mere 15% protection for our precious marine wildlife.
Don't let this chance go by. Our turtles, dugongs and other wildlife need your support today. Your grandchildren will thank you for it.

We are about to update the site to allow readers to sign up for our newsletters. We apologise to the people who have been looking for this feature. It will be delivered to your email inbox after you complete the subscription. Frequency will be determined by our need to contact readers and also the output of the writers.

Since we are all volunteers and have no physical home we appreciate all contributions.

If you are interested in writing articles for the newsletter please contact us - or send to the webmaster via the contacts page.

If you are interested to keep up to date with articles as published on the website please consider using the RSS feed which is available from each page of the website. Cyber mail will allow us to minimise our carbon footprint. Thank you. for your interest.