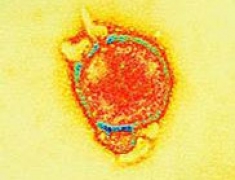 CSIRO scientist Dr Deborah Middleton works in the field of Transforming Animal Biosecurity - Livestock Industries and she is the theme leader for this reseach.The research results are published online in the very scientific journal plospathogens or it is available from links as part of the media release. ABC news reported on this 31 October 2009.

The CSIRO is claiming a breakthrough in the battle against the deadly Hendra virus.

A scientific team from the CSIRO and the United States has developed a serum which gives a good level of protection to ferrets exposed to the similar Nipah virus.

They demonstrated that administering human monoclonal antibodies after exposure to Nipah virus protected the animals.

The CSIRO's Dr Deborah Middleton, who led the experiments at Geelong's maximum biosecurity facility, says the findings are extremely encouraging. "Our research clearly suggests that an effective treatment for Hendra virus infections in humans should be possible, given the very strong cross-reactive activity this antibody has against Hendra virus," she said.

"As Hendra and Nipah viruses cause severe disease in humans, a successful application of this antibody as a post-exposure therapy will likely require early intervention."

But the director of the Australian Animal Health Laboratory, Dr Martyn Jeggo, says it is hard to know how effective it will be for humans due to the small number of cases.

"Whilst we have this treatment available, doing clinical trials and being able to determine how effective it is, is not going to be an easy situation," he said.

"So the likelihood is that when there's another case of Hendra virus infection, exposure to a veterinarian, this will probably be a treatment that we can see if it's going to be effective."

More in this category: « PRECAUTIONARY PRINCIPLE - explained by EDO Value of wilderness - unnaturally natural »
back to top