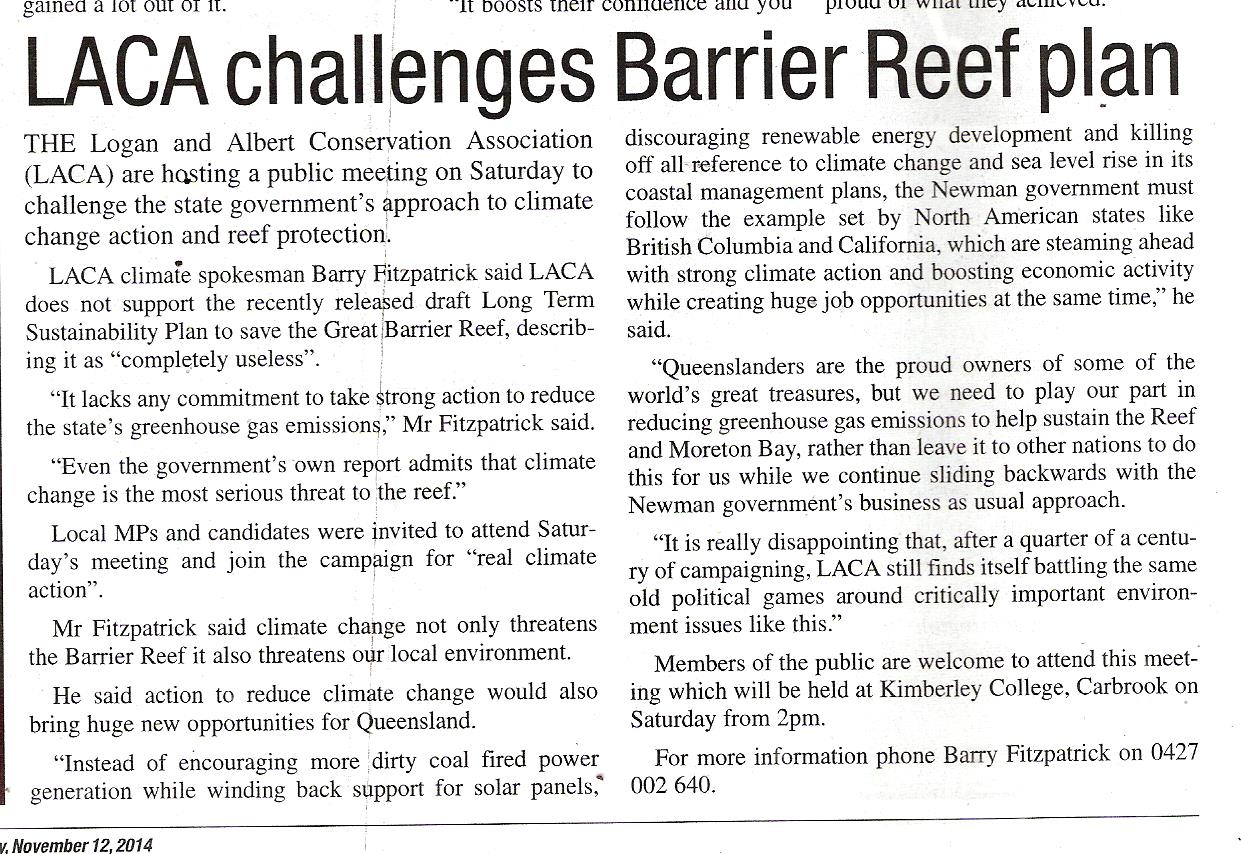 We are celebrating our 25 years of advocacy and activism by calling a public meeting to urge the Newman Government to reverse its ‘Alice in Blunderland’ approach to climate change action and Reef protection.

LACA climate spokesperson Barry Fitzpatrick said LACA could not support the Government’s recently released draft Long Term Sustainability Plan to save the Great Barrier Reef, describing it as ‘completely useless’ because it lacks any commitment to take strong action to reduce the State’s greenhouse gas emissions.

Members of the public are specially invited and welcome to attend our  meeting which will be held at Kimberley College, Carbrook on Saturday 15 November, starting at 2.00 pm. Contact : Barry Fitzpatrick 0427002640

‘Even the Government’s own report admits that climate change is the most serious threat to the Reef, so we’re asking our local State members and candidates to come to a public climate change meeting on Saturday 15 November, and join us by putting their hands up to campaign for real climate action from the Newman Government to help save the Reef.’

Barry Fitzpatrick speaks for us in saying that while Climate change seriously threatens our treasured Reef as well as the things that make our part of Queensland special - like the Scenic Rim, Moreton Bay and koalas - the smart thinking around the world is that action to reduce climate change will also bring huge new opportunities - if the Government is prepared to play it right.

‘Instead of encouraging more dirty coal fired power generation while winding back support for solar panels , discouraging renewable energy development and killing off all reference to climate change and sea level rise in its coastal management plans, the Newman Government must follow the example set by North American states like British Columbia and California, which are steaming ahead with strong climate action and boosting economic activity while creating huge job opportunities at the same time.

‘Queenslanders are the proud owners of some of the world’s great treasures, but we need to play our part in reducing greenhouse gas emissions to help sustain the Reef and Moreton Bay, rather than leave it to other nations to do this for us while we continue sliding backwards with the Newman Government’s business as usual approach.’