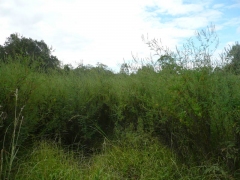 My weed of the month is ragweed (Ambrosia artemisiifolia). This enterprising American import is really taking over and does not miss an opportunity. Not only does it thrive anywhere in the bush where there has been a disturbance of the natural vegetation, but it also represents a severe health risk to humans, being regarded as the world's worst hay fever and asthma allergen plant. This has not been a good trade arrangement. After all, we gave the Americans our eucalypts and tea trees, and these are used to make stuff to sooth cold and flu symptoms and are probably good for asthma too.

I have seen (and hand pulled) from Cornubia Wetland Reserve, forests of ragweed two metres high and so densely packed that there was nothing else. It is interesting that this particular crop was located on a patch that the council had heavily sprayed in previous years, without any follow up work.

Spraying on its own probably encourages the weed, as it creates a new seed bed with little competition. The best method of control is hand pulling and mulching, with repeated follow up to remove new seedlings while allowing native species to grow and spread. Slashing, just before the flowers mature (February/March), will work to a degree, but must also be followed up, as a lot of the plants will grow again. The good news is that where the native bush is healthy and there is reasonable natural cover, the ragweed remains much sparser. However, if these are left to seed, following severe drought the ragweed will seal the deal before the native cover can re-establish.

The answer is to get rid of every single plant, wherever it is. Go home yankee. If you would like to help clear this weed from Logan, please contact  Barry  Fitzpatrick on 3287 9268. Logan City Council is keen to support all bushcare groups.