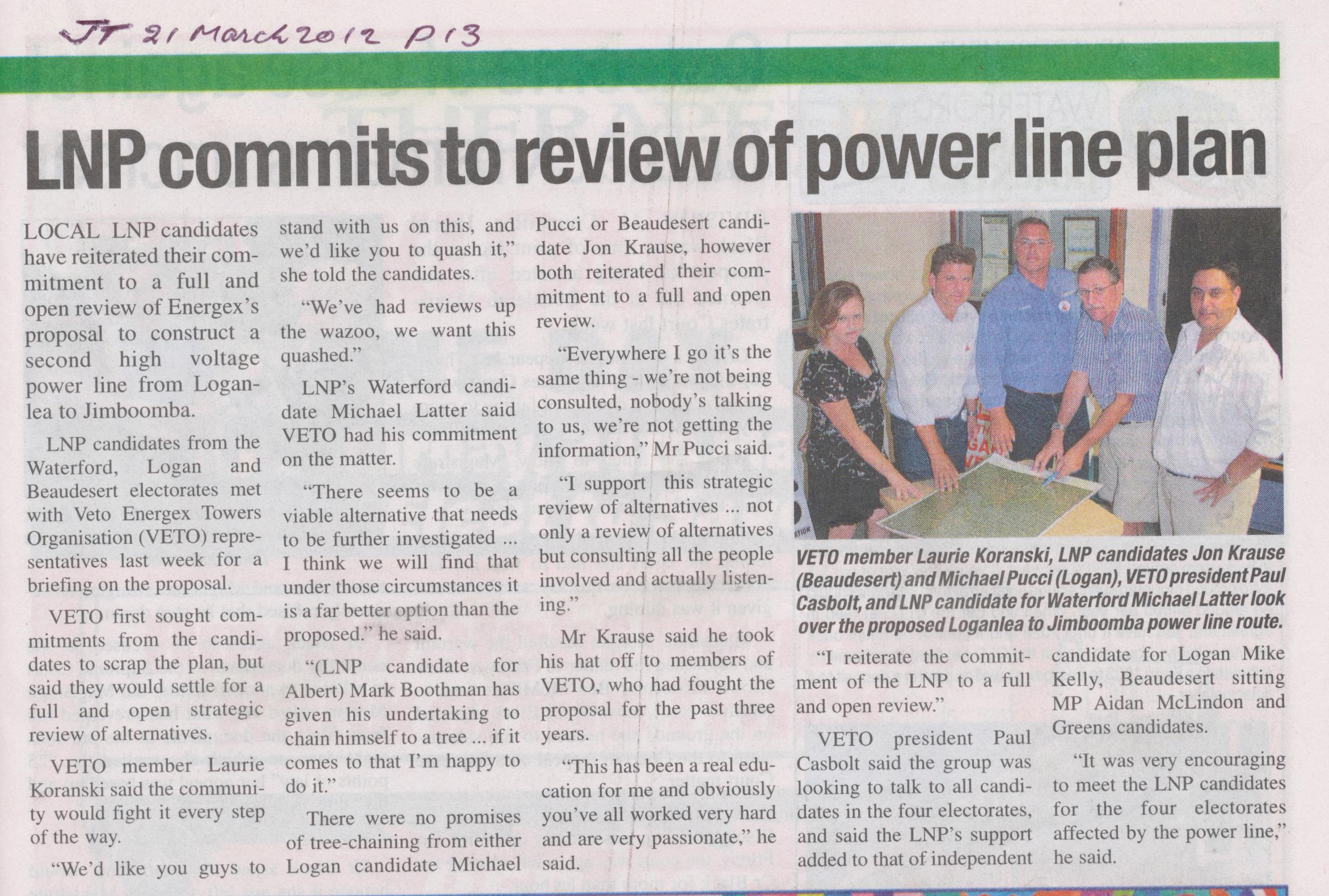 VETO group high hopes and expectation that sense would prevail and Minister Mark McArdle would reject the Energex proposed second Loganlea to Jimboomba 110kV powerline crashed Tuesday evening when a media release from the Minister advised that he has approved this powerline.

Logan City Council have supported VETO's efforts for four years to find a better solution to our power needs for the future - one that is both less costly and one which causes less environmental harm.

VETO believed new government was supporting our community in calling for a review of the Energex proposed second Loganlea to Jimboomba 110kV powerline.

Environment Minister, Peter Garrett said Australian homeowners will be able to make their homes more energy and water efficient with 1000 home sustainability assessors ready to begin work and credit providers signed up to commence the rollout of the Green Loans Program from July 1.
"Through Green Loans we are making it easier for 360,000 Australian homeowners to learn what they can do to make their homes more energy efficient from an accredited assessor.
"The fact is that for many households the assessor will identify simple, low-cost actions like changing light globes, sealing draughts and repairing leaking taps.
"However, there will also be larger-scale recommendations, many of which can now be adopted at a reduced or zero cost thanks to the Government's unprecedented investment in energy efficiency - namely installing solar PV or solar hot water or ceiling insulation. Solar hot water and insulation are two of the most cost effective energy efficient changes household can make.
"And now, with the launch of Green Loans, we're also providing the opportunity for householders to access up to $10,000 for other alternate changes, enabling them to be well and truly equipped for a low pollution future."
Mr Garrett said in light of the Government's $4 billion investment in energy efficiency, lower interest rates and major shifts in the global financial markets, some changes had been made to the scheme to ensure that it is better focused:
Household assessments for 360,000 households will now come at zero cost and will no longer be tied to the loan.

For more information on the Green Loans Program including a full list of eligibility guidelines visit www.environment.gov.au/greenloans

Loganlea to Jimboomba network upgrade information is available on the Energex website here.  Some individual landowners whose properties have been identified as being affected have been contacted by Energex.

However these concerned citizens are aware that there are far wider implications than a 40 metre easement across their land which is adjacent to the Logan River.

Given the current situation re environmental impacts of our traditional energy supplies, would we - the community, city and country - be better served by future investment being channeled to renewable sources and also targeting new growth areas for urban and industrial footprint expansion to be self contained and independantly energy sufficient?

Should this whole issue be debated openly before a corridor option is chosen by Energex? When do we review our comfortable ways of considering progress? Is more of the same what we want?

Local Logan Reserve resident Dieter Lacko was interviwed by Henry Tuttiett of the Jimboomba Times - the story was published 17 December 2008. Over 40 local residents gathered to discuss their concerns and how they could best resolve these.  Unfortunately neither Cr Phil Pigeon

Energex says that residential and commercial growth in South East Queensland and an increased demand for energy has led to a sharp rise in electricity consumption. As a result, the region's existing electricity supply is reaching capacity.

To meet increased demand, ENERGEX has embarked on a five year, $4 billion investment program across South East Queensland. This investment will reinforce the network and provide a more reliable and safe supply of electricity to residents and businesses.

Energex and Powerlink are not private companies: they are branches of Queensland government - this is a government service infrastructure. There is a Minister for Mines and Energy Mr Geoff Wilson.

It is proposed that Logan, one of the region's fastest growing areas, should benefit from this investment program. Neither Loganlea nor Jimboomba is a rapid growth area - see  Draft SEQ Regional plan.  Visit http://www.dip.qld.gov.au/regional-planning/draft-regional-plan-2009-2031.html.

The SEQ Infrastructure Plan was first released in 2005 and is updated annually to reflect and align with the latest planning and budget commitments. It sets timeframes and budgets to ensure infrastructure is delivered to support the region's growth.

The 2008 edition of the plan details around 300 identifiable projects, with an investment of just over $107 billion (inclusive of federal government contributions and other revenue sources):

Of particular note is the chapter on energy available as 11 page pdf file from the main page link above.

Can You Create An Energy Efficient Home? Can we do this in SEQ?

Kilowatt Ours is creating a network of homeowners and renters in America dedicated to striving for Net-Zero energy usage in their homes and apartments. Kilowatt Ours is the story of filmmaker and conservationist Jeff Barrie's 18-month journey across the southeastern U.S. to document energy-related problems and present practical, cost-saving solutions for consumers. Widespread problems revealed in Kilowatt Ours include mountaintop removal, air pollution, global warming, childhood asthma, and mercury contamination.

The film Kilowatt Ours shows the city of Austin as they built what they call an "energy conservation power plant." Rather than build a new coal-fired power plant, the community decided it was a priority to advocate aggressive energy conservation efforts instead. After 20 years, Austin now saves more than 600 megawatts of electricity every day - one power plant worth of electricity, generated strictly from energy savings. Here is a link to watch a short clip from Kilowatt Ours, featuring this initiative.

Sonya Wallace and Janet Millington are the founders and co-ordinators of Transition Sunshine Coast and have been working on these initiatives for almost two years. They will share their experiences and the lessons they have learnt about transitioning to ensure your venture is an ongoing success. Sonya has a background in emergency planning, communications and crisis management, and also has her Permaculture Design Certificate. Janet is a well-known permaculture teacher, a respected school teacher, school garden expert and now published author. Janet has her Diploma of Permaculture and a Master of Education.

Transition Towns are becoming increasingly popular around the world as people decide to take real action in making the move from oil dependency to local resilience in their local area. These workshops will give you the skills and tools to do the same in your community and join the rapidly growing Australian network.

Canungra community hosted the recent film forum on Australia Pumping Empty which was incredible. Engineer and energy expert, Lionel Orford, attended the evening and spoke of our imminent future and our only real alternatives to the energy crisis we face - conservation and sharing our resources to get by with less. Attendees travelled from Boonah, Beaudesert, Ipswich, Canungra area, Tamborine Mountain, Beechmont! Not big in numbers, but big in awareness. Deputy Mayor, Cr Dave Cockburn, and indigenous elder, John Long, opened the forum onto Scenic Rim Transition to Resilience.

Lionel said Peak Oil almost certainly happened in the first half of 2008 and we now face a worldwide decline rate of as much as 9% a year from existing oil fields. Some experts believe that Peak Oil was the underlying trigger for the worldwide economic crisis. This, in turn, caused demand for oil to fall faster than supply resulting in the dramatic drop in the oil price over the last few months. Lionel predicts prices will remain volatile and will spike up again as soon as there is any economic recovery. However, he states the oil price can't just go up and up - anything over about $120-150 destroys demand in fairly short order - as we have recently observed.
It was truly a most amazing forum listening to Lionel Orford - he had the audience riveted to their seats !

"Australia Pumping Empty: the Looming Peak Oil Crisis" is now available on DVD from the Aquila Productions website. This is a 45 minute film featuring Australian experts in various fields (including Andrew McNamara and Ian Dunlop) talking about peak oil. There is also a 3 minute clip on youtube.

The Australian Association for the Study of Peak Oil and Gas [ASPO Australia] is a nationwide network of professionals working (as volunteers) to reduce our oil vulnerability. They aim to bring the probabilities, risks and opportunities that Peak Oil presents to the attention of decision-makers.

Highway of Diamonds: address at the Brisbane Institute

Friday, 28 March 2008 Transcript of an address given March 4 to the Brisbane Institute by the Honourable Andrew McNamara, Queensland Minister for Sustainability, Climate Change and Innovation.

I'd like to pay my respects to the traditional owners of the land on which we gather this evening.

I want to thank the Board of the Brisbane Institute for the invitation to address this gathering.

Tonight I want to talk about capital S Sustainability.

By that I don't mean the usual narrow environmental concept of sustainability in agricultural production and land use.

I mean the future of our society, our economy and our environment; the structure of our cities, their energy and water sources and demand profiles; the treatment of these sources of our wealth; the imminent peaking of world oil supplies; our use of finite resources like gas and coal; and the way we dispose of those resources when we're finished with them.

I will begin by considering what sustainability means to me.

The full transcript is available at the website of ASPO Australia: Australian Association for the study of Peak Oil and Gas.