People power is our greatest asset in SEQ

Despite the number of horrendous unsustainable development or infrastructure processses being proposed in Logan, Gold Coast, Scenic Rim and Ipswich, community strength and energy to defend the natural assets of the region remain strong and continue to strengthen. SEQ has significant biodiversity values that are appreciated by longterm residents in the region and we are determined to protect them despite the unreasonable economic pressures and expectations that big business, state government and corporations want to impose.

Pre-election promises of the Campbell Newman led LNP government have been broken and the local members must also feel our disappointment. A platform based on the four pillars of economy, construction, tourism and agriculture leaves both natural and built  environment out of the equation.

Disinformation is also challenging to deal with - especially when government changes the rules to suit its 'development at any cost' agenda - cost being only dollars for construction. Follow detailed history at VETO's website for analysis of issues an alternatives. Queensland Minister McArdle's approval of the second Loganlea to Jimboomba 110kV powerline allows Energex to continue to "Gold Plate" their network with more "poles & wires" when other alternatives are available.

to come to GREENBANK and JIMBOOMBA

Please RSVP : Anne Page ph 3297 0624 or email This email address is being protected from spambots. You need JavaScript enabled to view it.

Please RSVP: Anne Page ph 3297 0624 or email This email address is being protected from spambots. You need JavaScript enabled to view it.

Read this infosheet for our suggestions to help you. 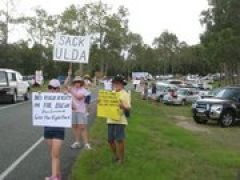 "This is the first time a community building program of this size and scale has been undertaken in Australia and it coincides with the one year anniversary of our government's Growth Management Summit," Mr Lucas said.

His statement that this marks the start of delivering the necessary planning framework to progress development of these three key areas as model communities in not credible. The media release was reported here

Since 2005 LACA has been advocating and lobbying for detailed background environmental studies to be both carried out and provided to the community as part of supposed openness and integrety of government. Access to studies done on behalf of Beaudesert has ben denied by Scenic Rimm Regional Council, Logan City Council [we now has 3 environment reports] and ULDA.

How can you have a model community - one that is based on ecological sustainable development principles when the existing wildlife with its essential habitat is not well mapped. This black hole of essential data must be filled before genuinely ecological sustainable development can b planned. Enen where we have an existing human settlement that is targeted for urban renewal or redevelopment. 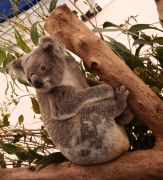 The biodiversity of SEQ is threatened - and that includes we humans. Our wildlife species need the humans who co-exist with them enjoying the same ecosystem services as the wildlife to speak up and contact the governing authorities.

We need each other to continue to enjoy our healthy lifestyle that is so popular. However, if you do not reduce our damaging impact on the natural environment, then we will destroy what we love. If we do not all tell governments that their planning is inadequate then we will lose our iconic and state emblem - the koala - except perhaps for those born in captivity who are unable to survive in natural bushland areas - like Freckles.

FRECKLES pictured aside attended Logan's LEAF event 2010. She is an ambassador to alert us to the plight of all koalas - especially those in SEQ and in all ULDA areas - Greenbank, North Maclean, Flagstone, New Beith, Yarrabilba, Undalla, Ripley and the whole Scenic Rim area which has other threats - mining and quarrying to support the huge population coming our way. CANBERRA was not planned in 6 months. Business as usual is no longer an option.  Consultants for the high density housing proposal at Greenbank suggest that our local koalas are already extinct?

WE know that is not true because we see and hear koalas throughout our area.

Please send your information to LACAs President This email address is being protected from spambots. You need JavaScript enabled to view it. so we can collate and forward to ULDA and DERM.

Come along to the next public meetings - every Wednesday at Greenbank www.save.greenbank.com.au for details. 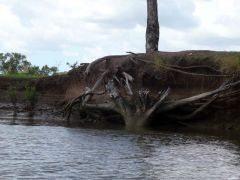 YOUR SUMBISSION IS IMPORTANT FOR THE SUCCESS OF OUR CAMPAIGN. YOUR SUBMISSION CAN  MAKE A DIFFERENCE.

Loss of essential habitat for koalas, gliders glossy black cockatoos and other wildlife.

Loss of scenic amenity and destruction of ambience of natural bushland.

Loss of opportunity to invest in renewable energies and more.