LARGE BLACK PARASITES CRY OUT - TO BE SAVED!

This article was originally published in EcoInformationSource 2002

All along the eastern seaboard of Australia a large black flying parasite can sometimes be heard crying out with deafening squawks reverberating around craggy cliffs. However, this magnificent creature is less commonly seen feeding on its helpless host. Not often referred to as a parasite, the Glossy Black Cockatoo (eastern subspecies) in South East Queensland must feed off either of two plant species to survive. A parasite is an organism that must feed exclusively off another organism to continue to exist.

The Glossy Black Cockatoo feeds for 6-7 hours a day exclusively on the very hard seeds of Sheoak trees. Surely they must feed on other stuff as well you ask? Well, it appears that the habit of the Glossy Black Cockatoo to chew bark, wood or fruits of gum trees (like other cockatoos) has been mistaken for feeding. All the studies to date show that it is just a thing they do and is not feeding. During the nesting season a division of labour agreement operates between the two partners. The female lays and incubates the eggs most of the time while the male partner feeds himself and then regurgitates food for the female. Good job they are close! Usually partners for life in fact. So the Glossy Black Cockatoo is effectively a mobile yet noisy parasite of the Sheoaks.

So what do we know of the hapless hosts the Sheoaks in this special relationship with a big black bird. Firstly, the clearing of Sheoak trees and 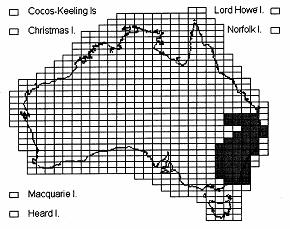 the associated eucalypt forests has resulted in an endangered listing of the South Australian subspecies. Northern NSW and SE Queensland are core population centres for the near threatened eastern subspecies of the Glossy Black Cockatoo.

The word ‘sheoak’ is a sexist based comparison of the supposedly inferior Sheoak wood with the good old English Oak back in the ‘motherland’! The word is not only inappropriate but also inaccurate. The wood from a number of the different Sheoaks is described as a hard, heavy wood, which can be used for fine furniture and small items with a unique grain and outstanding rich colours. This name is definitely a candidate revision for gender neutrality or better still the use of a local Mununjali name.  Anyway back to the trees themselves. The Sheoaks of vital interest to the Glossy Black Cockatoo are the Black Sheoak (Allocasuarina littoralis) and Forest or Rose sheoak (Allocasuarina torulosa). Just as cockatoos ain’t just cockatoos there are also quite few Sheoaks. Sheoaks are made up of two genera, Casuarina and the ‘other’ ones or as the Greek would have Allocasuarina. The ‘others’ were separated out of the regular Casuarinas because the fruit of Allocasuarinas have protuberances and no wings. There is another avian connection in that the Latin of Cassowary is ‘casuarius’ and the genus was named after the resemblance of the plumage of the Cassowary with the foliage of the Beach Sheoak (Casuarina equisetifolia). While we are on languages the Esperanto for the black sheoak is nigra kazuareno and arbara kazuareno is the international language’s name for the forest sheoak. The Glossy Black Cockatoo is not interested in such trivia and neither are most folk for that matter.  There are 46 species of Allocasuarinas that mainly occur in southern Australia with four that stretch up to Queensland.  And the two sheoaks that the Glossy Black Cockatoos are especially adept at spotting are shown here. I can’t spot the difference from these photographs but the Glossy can certainly distinguish between these and various other Sheoaks such as the River Sheoak (Casuarina cunninghamiana).

The Red-tailed Black and White cockatoos feed on various other Sheoaks but the Glossy Black is particular on the Forest and Black Sheoaks. Humans may be able to tell the difference by looking at where the trees are growing. The Forest Sheoak is generally found growing in fertile soils on hillsides and mountain slopes whereas the Black Sheoak tends to grow on sandy or stony soils on the coastal plains of SE Queensland. These are only generalisations and both plants are now grown in gardens and landscaping projects on a range of soils. We can also look at the main features of the trees. The Forest Sheoak grows to about 20m with a greyish bark that is vertically cracked and corky while the Black Sheoak grows up to 10m with greyish rough fissured bark.

The most obvious feature of all of the Sheoaks is the apparent absence of leaves. They have fairly soft branchlets that from a distance look a little like exotic pine needles (or Cassowary feathers). Upon closer examination they can be seen to be totally different. The branchlets (needles) are in fact a series of short jointed stems. If you pull apart one of these joins in the stems there are a number of little teeth. These teeth are the leaves of the plant and it is the number of teeth on the stem that helps identify them. Below are the magnified pulled apart end of the stems. Forest Sheoak can be confirmed if there are only 4 (rarely 5) teeth. Black Sheoaks are among a group of Sheoaks with generally 6-8 (rarely 9) teeth, other Sheoaks have more.

The new foliage of both of these Sheoaks can be quite striking in spring. The Black Sheoak is sometime called the Fire Oak (that’s a better name) because of the new rusty red tips and Forest Sheoak has purple red new shoots – perhaps ‘Rose Oak’.  Still on gender issues, like most of us Sheoaks are unisex. That is each plant is either a female or male plant. Only female plants produce the object of the Glossy Black cockatoos desires, the nutritious seeds found in the cones. These cones are produced each year and are retained on the trees for a number of years. Seed cones are red-brown when fresh and become darker and greyer with age. The Glossy Black Cockatoo only eat unopened cones and deliberately feed on larger trees, with more cones and larger cones that have larger seeds per cone.

This feeding strategy maximises their nutritional intake for the effort expended in foraging and opening the very hard seeds.  As species that occur naturally in SE Qld both Sheoaks can tolerate some level of fire. However from a Glossy Black Cockatoo perspective, intense fires can damage or kill mature trees and/or destroy the seed store held in canopy. Too frequent fires kills off young trees and prevent recruitment of replacement trees. In South Australia the Drooping Sheoak that the endangered southern subspecies of Glossy Black Cockatoo relies takes 15 years to recover from an intense fire until it of use to the cockatoo.  As a temperate species the Glossy Black Cockatoo is largely confined to mountain ranges and plateaus and is rarely seen far from Sheoak trees. They also need large Eucalypts for shelter between foraging, night roosts and large hollows for nesting. The key thing that can help protect the big black parasite is to protect their host plants. Existing stands of both the Forest and Black Sheoak could be identified and mapped. Given the raucous behaviour of the birds, the owners of such stands are likely to be aware of the birds’ use of the trees but may not be aware of the reliance of the cockatoo on the Sheoaks on their property and how they can help ensure their survival. A sensitive fire management regime would minimise the loss of the food source and maximise the recruitment of replacement trees. The management of grazing pressure from stock by spelling paddocks or fencing off can also enhance regeneration. The associated eucalypt forests with large mature hollow bearing trees (dead or alive) are also an essential part of the cockatoos’ habitat. Restoration or reintroduction of Glossy Black Cockatoo habitat requires careful planning. The provision of feed trees can be maximised by the selection sites of site suitable for either of the trees, selection of seed from nearest and the most productive trees, selective thinning of some of the planted males trees after first flowering, establishment of firebreaks and stock management fencing and the installation of appropriately designed nesting hollows and monitoring for unwanted occupation by more numerous native fauna.