This image of glider sightings has been compiled from sightings reported from residents along Camp Cable Waterford Tamborine Road and Hotz Road as part of the VETO survey from March to June 2010. 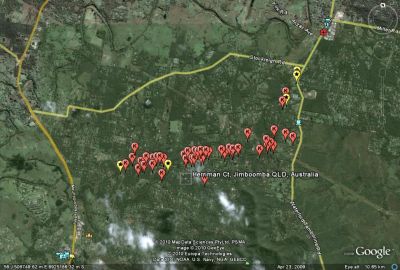 The use of digital tools available for us all now - as and when we learn how to use these webtools - are an essential piece of out activist - advocacy toolkit. Photos maps aerial images from Google Earth or NearMap can help us support our efforts to secure ecologically sustainable development.

Business as usual is not acceptable for us now, our children and future children.

Read 1074 times Last modified on Wednesday, 24 July 2019 04:44
More in this category: « DERM online reporting wildlife information Did you hear that koala last night »
back to top