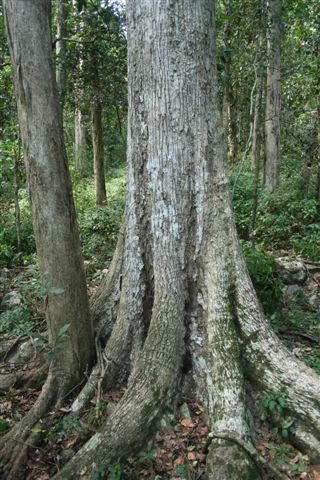 A NEW group lobbying against a large housing development planned for Bahrs Scrub has likened the Logan City Council proposal to the Traveston Dam debacle. Save Bahrs Scrub spokeswoman Petrina Maizey said thousands of ratepayer dollars would be wasted on preliminary studies and impact statements needed to assess the 4000-lot development's viability.

She said such studies would prove that the 510ha zone bordered by Wuraga and Sharton Roads was environmentally significant and that ‘‘exceptional'' flora and fauna must be protected.
‘‘Ratepayers' money will have to be used by the council only to find what our preliminary investigations and other studies have already made abundantly clear - hat this development is not viable physically, environmentally or economically on 70 to 80 per cent of the selected site,'' Ms Maizey said.

The black plum of Bahrs Scrub Pouteria Eerwah is listed as a federally endangered plant. In another area of Logan we have another plant commonly called Veresdale Plum - also Pouteria Eerwah and LACA, Logan and Albert Conservation Association, has established a recovery and management plan for that species.

We have also received federal funding to carry out some of the essential work. Pouteria Eerwah is only one of several that have ferederal protection under the EPBC Act. This means that the Australian government will be included in the assessment process - as for Traveston - before approval can be given.
Planning and Development Committee chairwoman Cherie Dalley said the council last week created a special steering committee of councillors and bureaucrats to guide planning. She said that while no members of the public were invited to join,canvassed when plans went out for public consultation. ‘‘This is something we've done with every one of our local area plans, it is normal process,'' she said.
‘‘Our role is to look at what the planners tell us and make decisions.''     .

More in this category: « Biodiversity hotspot at Bahrs Scrub The Mighty Bahrs Scrub - can we save it? »
back to top