Seven year old Angela Koranski is in Mrs Olsen's year 2 class at Canterbury College. Angela recently entered the Logan City Council's World Environment Day Poster competition. Angela was selected as one of thirteen winners. Her winning entry will be displayed at the Logan Art Gallery and her poster will be reproduced as part of a Logan City Council calendar.

Angie's entry was titled "River of Life" and related to conservation of the
Logan River. In her entry she wrote ...

"I live on the Logan River. So do lots of birds, reptiles, mammals and plants. Cutting down trees means the animals won't have a home. Nature is special. We need to look after it!" 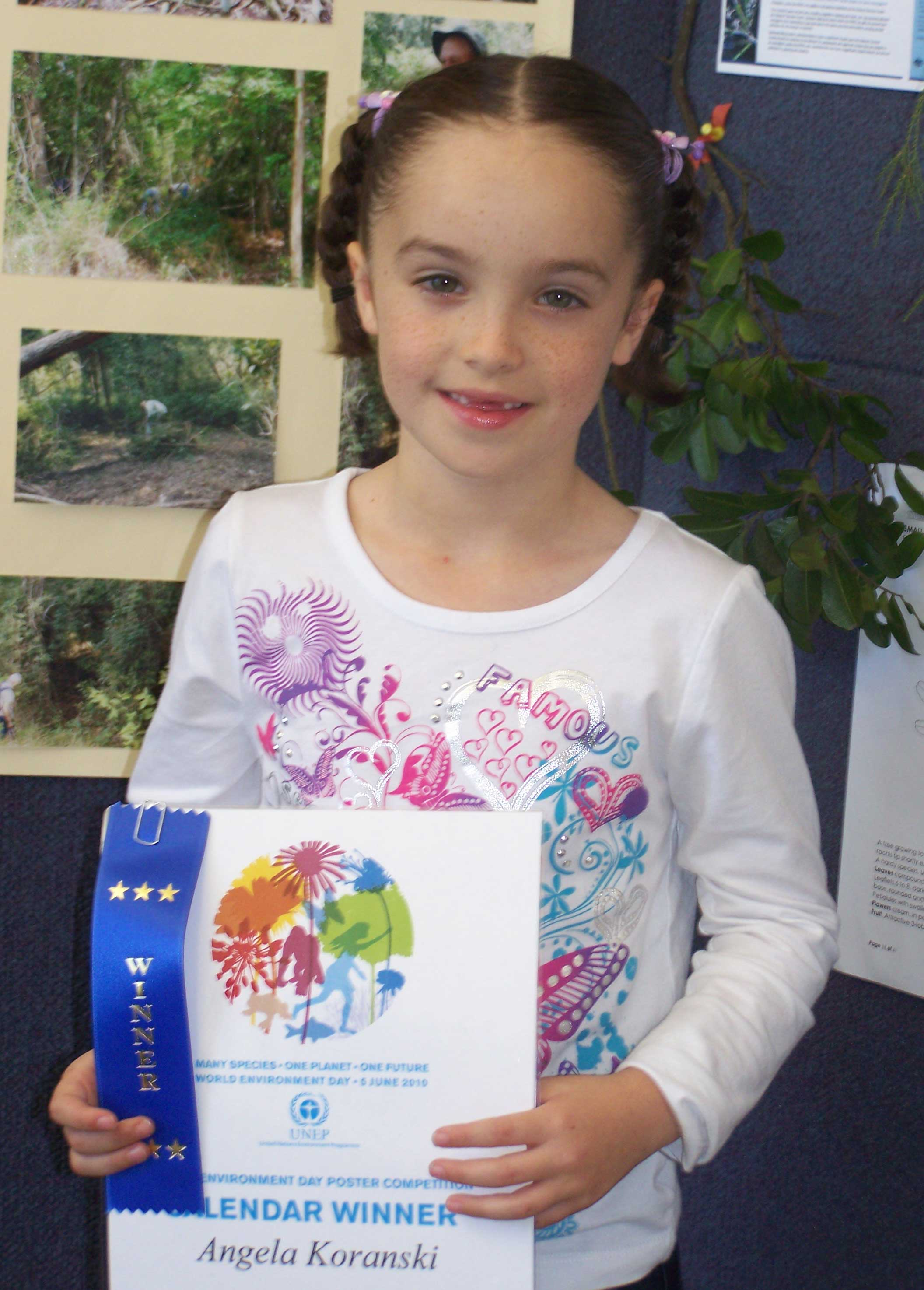 On Saturday 5 June Angela and her family attended the Logan Council's Leaf Festival where Angela received her prize and award. At the ceremony Angie got to meet several of Logan's local councilors including Mayor Pam Parker. This was an extremely exciting day for Angela (and her parents also.)

A World Environment Day Poster competition has been an annual event in Logan City for many years and Council is to be commended for providing such an opportunity for the city's younger citizens to be involved in this important day which celebrates the many  ways we benefit from the natural environment and serves to highlight and focus our actions on one aspect.

This year 2010 is the INTERNATIONAL YEAR OF BIODIVERSITY - reminding us of the many interdependant species with which we humans share the planet.

Will we heed the wisedom of the young? The health of the Logan River is essential for the wellbeing of many species - including the human residents of Logan. All too often we fail to see how all life is connected and how the overall health is dependant on each part - each species - remaining healthy.

Although our Logan River has been identified by the scientific measurements of the Healthy Waterways team, we are not seeing any attempts to address that ill - health  (an F for fail).

The floodplains of our river - all rivers - are where human settement occurs, because nature's benefits are more bountiful there. It is because of our land use pattern - the clearing for houses, clearing trees and lower vegetation for human infrastructure needs such as electricity that  our river has become degraded and long term survival of other nonhuman species is in doubt.

The planet needs all species. Will we continue our business as usual approach to the expanding human population - in South East Queensland  and Logan in particular.

What impact will the Queesland government's plan - supported by Logan City mayor Pam Parker - for two new satelitte cities have on the Logan River. When will we have a Conservation Plan? Will it be an essential part of Logan's new Community Infrastructure Strategy? When will natural environment be recognised by the planners and acknowledged as well as young Angela Koranski?

More in this category: « Competition and Entry Forms TOXIC WASTE? NOT IN OUR BACKYARD! »
back to top