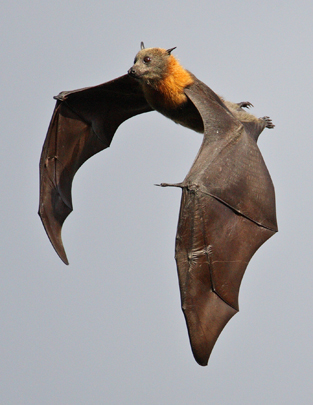 The announcement on Threatened Species Day of a permit to kill flying-foxes is not well received by concerned wildlife groups and animal welfare groups. It is unbelievable spin by Environment Minister Andrew Powell that "This is about giving greater control to farmers over managing their crops while striking a balance with animal welfare and conservation."

Humane shooting [at night], agreed limits with quotas per species, no impact on the long term survival of the four flying-fox species, DMPs  only issued as an absolute last resort.

The Australasian Bat Society (ABS) condemned the move, saying that it is worrying that native species can be considered as pests and subjected to inhumane methods for control. The ABS does not support the shooting of flying foxes in any situation.

Dr Booth, a biologist from the Don't Shoot the Bats Campaign, says flying foxes are nocturnal feeders and most shootings are likely to occur at night. You can't patrol an entire orchard all night with a shotgun. Proper netting, with tiny holes, is a much more humane and far cheaper solution.

The correct netting is essential as many flying foxes die an agonising death trapped in loosely draped black throw-over netting . There were more than a million gray-headed flying foxes on the east coast last century but numbers had fallen to about 300,000.

Each bat spreads 60,000 to 90,000 seeds in our national forests so without these guys our forests are in big trouble.

Read about importance of flying-foxes here  and damage mitigation permits here both on EHP WEBSITE.

Fruit growers may be happy but non compliance of any policy is usually up to community being the watchdog. The future of our flying-foxes and forests they pollinate are now in jeopardy.

According to Minister Powell these new laws have been developed with input from growers, conservationists and animal welfare advocates and he is confident they've got the balance right. this writer is very sceptical of that spin.

More in this category: « Flying Foxes need our help Have you seen a spotted-tailed quoll? »
back to top