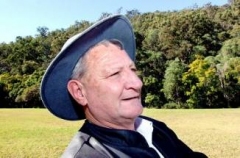 Environmentalists and concerned citizens are dismayed at lack of foresight by state government and local councils which blindly accept SEQRP urban footprint proposals.

Ted Fensom, pictured aside, has been campaigning, and continues to campaign to assist local communities to protect what remains of open space, natural habitats and bioregional corridors, good quality agricultural lands, wetlands and riverine vegetation. Many of our rare and threatened fauna species depend of these patches of disconnected fragmented bushlands.

Glenn Leiper's presentation at the community meeting held at Windaroo Valley high school 5 November 2009 highlighted the rare and threatened and newly discovered plant species that are part of Bahrs Scrub biodiversity. Information about these rare flora will be added soon.

Albert and Logan news reported our concerns in July this year. Story is repeated here.

ENVIRONMENTALISTS have attacked a major development plan being mooted for Bahrs Scrub, saying it will ruin a beautiful "garden of Eden''. Brisbane Regional Environment Council co-ordinator Ted Fensom said the influx of 10,000 people within a decade would destroy rare plants and wipe out endangered animals.
"There's a lot of things of regional and state value in that area that are not recognised,'' he said.
"Koalas have been sighted but it's not mapped as a koala habitat and there are rare plants (and) uncommon fauna, that no one has documented.''
Mr Fensom also raised concerns about road access, saying Bahrs Scrub Rd was subject to flooding, while residents had fought to upgrade the dangerous Wuraga Rd for years.
"It's a huge amount of traffic,'' Mr Fensom said.
"They'll have to turn Bahrs Scrub Rd and Wuraga Rd into four-lane highways and that's just going to whack koalas in the area.''

Amateur botanist Glen Leiper, who has published a native plant field guide, slammed the Logan City Council plan to retain some areas within the development as green space.
"As soon as you fragment these little sensitive areas, you open up the areas to weed invasion,'' he said.
"Weeds smother natives but the fragmentation also dries out the edges and expose the areas to more sun, wind and predators.''  He said the subject land deserved to be protected.
"It's not worth just protecting little narrow strips of green here and there that are like little ribbons in a sea of concrete,'' he said.  "It will just diminish the worth of such a wonderfully biodiverse area.''

Development to the detriment of a healthy diverse ecosystem should not be an option for any governing body - local, state national or international. Greed and profits are destroying our wildlife, our ecology, our environment and we human ulitmately depend on that system ourselves.

The value and significance of the area was recognised by Gold Coast Council and members of the state herbarium and published in a 2003 report. This report is available on line and can be viewed or downloaded here.