Stop the Government from populating the life out of South East Queensland! 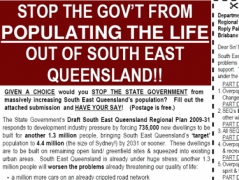 Given a choice would you stop the State Government from massively increasing South East Queensland's population?

Use this link to Queensland Conservation Council's online submission form and have your say.

Remember, personalised submissions get more attention. To edit your submission and add your own points just place your cursor either before or after the main text and type in normally. Your points will be a part of your submisson. Go to QCC Queensland Conservation Council website here to make your online submission http://qccqld.org.au/SEQ_submission.html

Minister for Infrastructure and Planning Stirling Hinchliffe Tuesday, March 31, 2009 announced the public consultation period has been extended to 1 May instead of closing of this Friday.

Population: The elephant in the room viewpoint expressed by John Feeney in BBC article which looks at the global population situation raises similar concerns of carrying capacity at the global level.

"Our inability to live as we do, at our current numbers, without causing pervasive environmental degradation is the very definition of carrying capacity overshoot."