Weed of the month - May - Water Mimosa 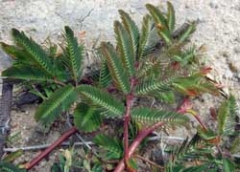 The hunt is on for a pest weed being grown as a vegetable commonly used in Asian dishes.

Water Mimosa is the worst kind of weed in Queensland - a Class 1 declared weed that is highly invasive and endangers waterways. Minister for Primary Industries, Fisheries and Rural and Regional Queensland Tim Mulherin is asking south-east Queensland communities to help find it. "Water mimosa is an aquatic weed that can release nitrogen into waterways, which affects water quality and can lead to increased algae," Mr Mulherin said.

"The nitrogen levels also create the perfect growing environment for other declared water weeds, which kill our native wetland plants and fish."

"A brochure warning of the danger of water mimosa has been produced in six different languages and will be given to residents, councils, and grocers.

"Six Biosecurity Queensland officers and 9 Logan City Council officers will begin a search mission this month in the Logan area. "We are also planning operations in other local government areas," Mr Mulherin said.

"This weed has the potential to cause major problems in our waterways so I encourage residents to help in the hunt to find it,'' Cr Pidgeon said.

"Our staff are dedicated to keeping weed infestations to a minimum throughout Logan City, and we are happy to support Biosecurity Queensland in their campaign."

Biosecurity Queensland general manager Bruce Wilson said: "Water mimosa is grown as a vegetable in South-east Asian countries. We are aware that it is being produced by some market gardeners in the greater Brisbane area.

"Our campaign will involve knocking on many doors and searching backyards and waterways but the potential damage from this weed warrants the effort."

Water mimosa is commonly found in and around fresh water pools and wetlands.

"The weed grows from the bank and extends out over the water, with the potential to cover the entire water body if not controlled," Dr Wilson said.

More detailed information is available from the government website for the Department of Primary Industries and Fisheries.