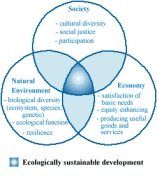 The Draft South East Queensland Regional Plan 2009-2031 adopts uncontrolled population growth, ignoring any consideration of a population cap for SEQ. Not to limit population growth is to accept that our lifestyles and environment will be destroyed irrevocably and that our water, mineral and other resources will be depleted sooner rather than later.  Australian Bureau of Statistics (ABS) data shows that the population of SEQ is increasing at about 1.8 per cent per year; about 41% due to net overseas migration, 39% due to natural increase (the excess of births over deaths), and 20% attributable to net interstate migration.

In 2009, SEQ suffers from many population-induced pressures, including:

b. increasing atmospheric and noise pollution;

g. rapid depletion of dwindling mineral and other resources;

h. detrimental visual and lifestyle impacts from continuous building works throughout the region;

i. increasing transport problems with parking and public transport availability;

Part D, Section 1, of the Draft South East Queensland Regional Plan 2009-2031 is devoted to it. The Plan, at p.32, quotes the goal of the National Strategy for Ecologically Sustainable Development, which is

"Development that improves the total quality of life, both now and in the future, in a way that maintains the ecological processes on which life depends".

Importantly, the Strategy endorsed by the Council of Australian Governments, defines ecologically sustainable development as:

‘using, conserving and enhancing the community's resources so that ecological processes, on which life depends, are maintained, and the total quality of life, now and in the future, can be increased'.

The Strategy specifies three core objectives for Australian governments to follow. These are to:

The Plan does not comply with the third core objective. Additionally, throughout the Plan there are clauses that allow sustainability to be overridden whenever population pressures arise.

This article is based on Hackett gives his view on the new South East Queensland Plan available here in bayjournal.com.au.