Without YOU Koalas face extinction in SEQ 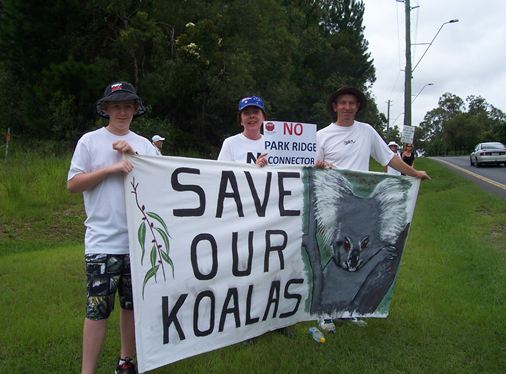 What a dismal future is "planned" for our koala populations in SEQ!

LACA members would agree with Federal Environment Minister Tony Burke's statement that "the states on their own have allowed numbers to continue to go into freefall." While this rapid decline in numbers may be attributed to development, cars, dogs, disease and climate change the real picture must also include the lack of political will to make decisions and legislation that will be loudly opposed by the development industry. The decades of work done by the Australian Koala Foundation - funded by community was instrumental in the EPBC protection coming about.

The image above shows community protest outside property DTMR wants to acquire to build a road freight motorway - called Park Ridge Connector Corridor. This property is currently shared with resident koalas and other species. It also shares many species and values of Berrinba Wetlands and Karawatha Forest.

Why would government want to pave any of this?

We - ie all governing bodies and communities of people who share koala land - need to preserve all koala habitat currently used - and take preventative action to retain the ecosytem containing the food trees. The mantra NO TREE NO ME is absolutely true.

It is a shameful indictment on the Gold Coast city that the Coomera development has occurred. The so called scientific research re translocation is a furphy to obtain funding. It does not  justify clearing koala habitat to build houses and infrastructure for people! To make matters worse Gold Coast council has recently decided to place a protection order on two camphor laurel trees - an environmental weed species. What persuaded them? Someone chained to a tree for two days.

More in this category: « Save the Koala Month, AKF - awareness and fundraising Can we rescue the koala from extinction? »
back to top