Trixie tells of her recent visit to a dedicated team of wildlife carers at Canungra where baby bats rest in shirt pockets where their progress is monitored.

Cruising south bound towards the Gold Coast Hinterland where Trish's property is located one could not help but notice how the landscape had been transformed. From parched brown to lush green: a  sight  not seen for a very, very long time, thanks to the heavy but welcomed constant rainfalls over the past couple of weeks.

We ascended Trish's steep winding driveway that lead us to her home nestled high in the hills. As Paulette and I emerged from the car I took in the sight of Trish's acreage with its rolling hills and deep valleys. My first visit was filled with images of tall mature trees, water filled dams and the collective sounds of the wildlife. I could hear the distant calls of the currawongs, the crack of the whipbirds echoed in the hills, the familiar sounds of squabbling lorikeets and figbirds raiding fruit bearing trees. The land had a serene feel but within the walls of Trish's home a completely different story was exposed. 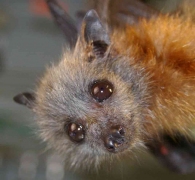 As I stepped through the front door of Trish's the atmosphere inside was a far cry from what I had witnessed outside only moments before. Slouched in chairs were half a dozen bat carers with a new batch of babies that required their 3-hourly feeds. Babies lay on laps, cradled in arms and smaller ones were tucked into large pocket shirts.
These carers had been feeding throughout the night to meet the demands of their charges. Exhaustion had set in but there were still lots and lots of mouths to feed and the carers knew that only too well.

A little background history...As a matter of routine the Canungra Flying Fox colony was being checked out when a discovery was made - a drama that no one could have envisaged had unfolded. It is not uncommon to rescue a handful of baby flying foxes during the breeding season but when you are alerted to over three hundred starving, dying and dead babies of the vulnerable listed Grey Headed Flying Fox being abandoned by their mums it raises a grave concern. The Canungra Camp was in serious, serious trouble.

I could hear the constant ‘chittering' of the little critters and as I entered the infirmary only then did I realise the enormity of the whole event. ‘Foxes' everywhere, approximately 113 of them were housed in this room. Carers were seated about busy in their routine of feeding and changing nappies while others were monitoring the drip feed babies. Others were taking out the ‘empties' and returning with the ‘refills'. A real eye opener - imagine one on three hourly feeds times one hundred and thirteen.

Wanting to take some photos I manoeuvred around the carers and the ‘foxes' which were all hanging about many off the portable indoor clothes airers. Some were asleep contented with a full belly, their wings fully wrapped around their bodies. A few others obviously bored wanted to play or harass the sleeping ones. That caused a bit of a spat. Others were giving themselves flapping exercises and some just followed you with their inquisitive eyes. Then of course you get the little persistent guys trying to hitch a ride every time a carer passed by.

I had my own minor drama. I sat on the floor to take some photos at a particular angle and I needed a little more space from my subject so I pushed back with my feet and slid back. Suddenly I felt a cold, wet feeling make contact with me. A huge puddle of ‘you know what'. A nappy was handed to me and I missed the shot.

Just having left the noisy Crèche I entered the Intensive Care Unit (ICU). This room offered a stark contrast to the Crèche. Humidi cribs everywhere, each crib bedded many, many babies. Approximately 120 babies found in this room. Most were asleep wrapped in their ‘yellow cloth blankies'. All were closely monitored including the drip feed babies. I peeked into a crib as some of the little guys stirred from their sleep, eyes open ready to demand another feed. I couldn't help but notice their dark eyes, full of innocence but lacked that ‘sparkle' found in the eyes of the other babies in the Crèche. Perhaps they were wondering the whereabouts of their mums.

Watching them struggle to survive is heart-wrenching stuff and I had to overcome my desire to hold, cuddle and whisper to each one "you are going to be ok!". These guys have a very long road ahead. My visit to the ICU was brief.

I spotted Trish in the examining room. She and an assistant were carefully examining a barb-wire casualty that had just arrived. Peering over her shoulder I could see the extent of the injuries. It was not pleasant and the outcome for this guy was not hopeful.

About this stage I was feeling clammy due to the humidified rooms, so I popped outside only to find the air outside was not any better.

I caught up with Trish again and she was attending another bat by applying some generously donated Medihoney. When the appeal went out several boxes of Medihoney were given for care of the babies. This Manuka honey has great healing properties and results are seen within 24 hours. Trish informed me that carers use Medihoney all the time to assist the healing.

In the corner of Trish's medical room were many open plastic shopping baskets strewn with donated towels to assist more babies that wished to crawl and explore.

Trish looked tired but was staying on top of things. When the crisis happened the first 48-72 hours would have been absolute mayhem. It's almost a question of "where do we start?" Although things seem to be running more smoothly, it's still one hell of a challenge.

Just before Paulette and I left I made one last visit. Downstairs in the cool-room were boxes and boxes of donated fruit waiting for the ‘choppers'. Paulette knows all about the chopping as one of the volunteers she spent several hours helping. The volunteers spend hours chopping the fruit only to have it start all over again the following day.

I applaud you the bat carers for your dedication in caring for all these babies and for continuously working around the clock.

To the volunteers who assisted in general duties I salute you. Without your support the vaccinated carers would not have been able to manage their workload in tending to the babies.

And to you Trish - you are to be congratulated on managing the enormous challenge placed before you.

Read 1934 times Last modified on Wednesday, 24 July 2019 04:42
More in this category: « Pheasant Coucal - Animal of the month - April Abandoned baby bats and their rescuers need help - from all of us »
back to top