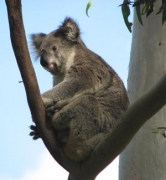 Greenbank community residents held its second meeting Wednesday 16 February 2011. State member for Lockyer IAN RICKUSS MP attended both meetings and urges all citizens to use the power of the people to gain the attention of the state's political leaders.

We were delighted to hear that his representation on community behalf has granted us a two week extension to be better abled to make more and more detailed submissions to ULDA about the Teviot Downs Estate development proposal. Submissions are now due 15 March 2011.

There have been no wildlife surveys conducted by the developer / consultant or ULDA. Development application documents suggest that

know this is NOT TRUE.

We know because we see them, hear them, and have seen and heard them, for many years. However if we have not sent in sightings of wildlife to DERM Department of Environment and Resource Management, that data is not available when desktop studies are done.

Spotted tailed quolls have also been confirmed as being in our area - but not listed in the environmental report for the development. Dr Scott Burnett did a study for Beaudesert Shire Council pre amalgamation. LACA and its members contributed to funding this study - but it is not available to the general public.

Why not? Who owns the study? Is it with other publically funded studies we are unable to access - even with RTI Right to Information process.

If you have not already sent your wildlife sightings in to DERM - or don't know how - contact LACA president Anne Page next meeting 23 February and record your sightings - to be sent to DERM.

Our job is to make sure they hear what we are saying. Take action. Sign the petition to be tabled in parliament.

Send in a properly made submission. Attend meetings arranged by   http://www.savegreenbank.com.au/

Save our local wildlife from extinction. We are all in the one boat. We all benefit from and need the natural environment.