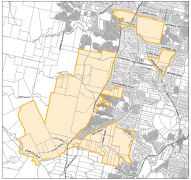 The major land mass for Greater Flagstone is west of the interstate railway line. Click on image to open ULDA map file.

Many people do not asociate Greenbank and North Maclean with an urban footprint tagged with Flagstone. Until now Flagstone has not even been a suburb of Logan but part of the suburb of  Jimboomba. The Flagstone estate has been an area with small acreage development for many years with both primary and secondary schools within the area.

The use of creeks and rivers as the boundary line - cutting some proprties into two - is cause for concern since there are policies for protecting riparian corridors - but policies without teeth in legislation offer no protection.

To have such disparate areas proposed as a model city for development does not match my vision - or community vision expressed at WOSPP. Teviot Road and Cusack Lane are major access roads used by present population. High density development west of rail line will mean multiple crossing across the rail line to access Teviot Road.

There are many documents on ULDA website to read to make an informed submission. EDO workshops will be held to help you with submissions.