There are several endangered species indigenous to this area.

The many people who attended and / or presented at the workshops and expo all share a concern that the welfare of our native fauna is not given adequate protection by current local, state or federal legislation. Current road design does not make provision for safe fauna crossings. Although  some small moves towards increasing fauna protection has occurred, really nothing is happening fast enough.

Look at this youtube video, produced by registered wildlife carer Trixie. Everyday she is called to rescue birds, her paricular passion, from senseless acts of cruelty - unintended though they be. Most of us do not see the consequences of our actions and continue to do what others do because that what humans do.

Go to this link to view an environmental crisis. Wildlife carers receive almost no financial support to help care for injured fauna and locally in both Logan City and Scenic Rim Region we have as yet no planning in place for longterm care of those creaures unable to be released to natural bushland areas. We also have no wildlife hospital as exists in Gold Coast, Brisbane and Sunshine Coast areas. CAN YOU HELP US IMPROVE CONDITIONS FOR OUR LOCAL WILDLIFE?

Why did the Possum cross the highway? 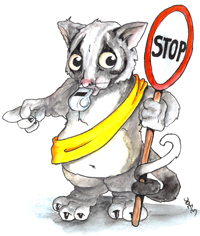 Seeing our native fauna lying injured - or dead - on the side of our roads is an all too common sight. It is an unfortunate reminder that the wilderness surrounding our cities is often little more than islands of habitat, making it risky for animals to move about.

In the past, a solution has been to erect a series of nets spanning the width of the highways - a lofty pedestrian crossing for possums. While there is some evidence that animals will use these walkways, only recently has this been studied in detail.

Ecologist Rodney van der Ree, from the Australian Research Centre for Urban Ecology, has completed the first study investigating the behaviour of animals in a habitat prior to a bridge being constructed. "We've been able to measure the extent of the problem before the bridge went up," Rodney says.

Using radio tagging, a range of marsupials - including several types of possum - were tracked for six months near the Hume Highway in Victoria. Their movements across the highway were recorded.

The tiny squirrel glider was the only animal studied capable of gliding between trees. It was found that it only crossed the road where large trees were grown on the highway's median strip. Other animals, such as brushtail possums, simply did not cross at all.

Reduced movement in a habitat can destroy entire populations of native species. Without the ability to relocate, groups of fauna are threatened by diseases that can spread rapidly. For threatened species, such as the sugar glider, this could make a significant impact on their numbers.

While the study is not yet complete, early results indicate that many animals are making use of the rope bridges. For example, some ringtail possums have been recorded crossing the walkways up to fifty times over six months. Others, such as brushtail possums and sugar gliders, have been seen making partial crossings. A number of other animals such as magpies, spiders and geckos have also been spotted on the bridges.

This information will be used to make decisions concerning where future bridges will be built. As more roads are built and more native bushland is affected, knowing how this will impact on our wildlife is becoming increasingly important.

Why did the possum cross the highway?
Because it can do so safely - at least that is what an Australian study into the impact of wildlife rope bridges shows.

He says early results show the animals have acclimatised to the bridge.

"These early findings are impressive as they show that native animals have acclimatised to the 70 metre rope bridge and are using it to cross the highway to find food, shelter and mates," says van der Ree.

He says the squirrel glider results are particularly positive as they are faced with the threat of extinction in Victoria and New South Wales.

The team will continue to monitor movements for another few years to determine whether population sizes on either side of the highway change and what motivates the animals to use the bridge.

He says climate change will also increase the importance of similar structures as animals will need to move from lowlands to highlands as the temperature increases.

"Ultimately the measure of success is whether the population size on each side of the road increases," he says.

"This is not just about crossing the road, this is about reducing the risk of extinctions."

Beautiful closeup photos of male and female Glossy Black Cockatoos (Calyptorhynchus lathami) provide detail of eating methods. Photographed at Kobble Creek, SE Queensland, Australia May 2008. You will have to click on the links to go to flickr.com where community may post and share their photos. Thanks to this photographer for sharing.

A growing band of indigenous leaders now believe that hunting by their people is excessive and no longer sustainable. The leaders argue that a combination of increased human populations and the use of firearms, vehicles and motorboats has distorted traditional notions of hunting.

"It is easy these days for too many animals to be killed," chairman of the Mapoon Aboriginal Shire Council, Guivarra, says. He adds that hunting is jeopardising plans by the Mapoon people to emulate Kakadu's success as an ecotourism destination. "We have the same wetlands and waterbirds, but soon there won't be anything for people to come and see," he says in The Australian 26 April 2008.

7500 ecologists petitioned to save last lungfish

Mary River was home to a number of rare and endangered species, including the well known Mary River cod and turtle and the Queensland lungfish. There were also a couple of smaller fish regarded as rare or endangered. There used to be nine species of lungfish in Australia, but all of them are now extinct except for the Queensland lungfish.  This was part of the interview with Professor Angela Arthington Professor of Environmental Science at Griffith University and a research member of the Australian Rivers Institute, Angela Arthington during ABC Radio's rural program, Bush Telegraph.

More than 60 wildlife species have been identified in Australia as occasional or regular victims of barbed wire fences.  Each year thousands of these animals face a cruel death or permanent disability from entanglement on wires that are invisible to them at night.  Many of the survivors are euthanased as they are unreleasable.  Nocturnal animals such as bats, gliders and raptors are especially at risk.

Barbed wire is an icon in the Australian landscape that has remained unchallenged for too long.  Fencing is integral to good land management, but it needs to be done in a way that is wildlife-friendly.  There are non-harmful fencing alternatives available that minimise the likelihood of harm to wildlife. Read more about it on the Bat Rescue website and here.

Records show that many animals and birds are threatened by barb wire fencing - possibly no fauna is safe, depending on prevailing conditions at the time. The Threatened Species Network is funding this project and Bat Rescue Inc.is actively involved in alerting us all to the problem as well as rescuing entangled bats. We can all help by providing information stories and spreading the word. Many of our actions are done without thought of other possible outcomes - other than solving out immediate concern. Read about some of the rescues and consider helping this group or project however you can. Solutions have been found. Read about them here. Collection of data is an invaluable research tool.

Do or die for threatened species

Experts warn that many Australian mammals are in danger of suffering the same fate as the Tasmanian Tiger, as changes in climate threaten to make many species extinct. Human activities in Australia are having a devestating impact on our native fauna as has been reported on recently on ABCs 7.30 Report. The country's leading experts agree it's likely more of our species are headed for the cupboard. A new report by the CSIRO says climate change will bring inevitable and unpalatable choices. Do or die for threatened species story in Sydney Morning Herald for March 31, 2008 sums up with ...

the report cites studies showing how some bird species are already adapting to climate change as they shift their migration and breeding patterns, potentially having cascading impacts on insect species and plant seeds.The forest kingfisher, for example, is now breeding twice a year rather than once. Some migratory birds are arriving earlier and leaving later. In Western Australia, tropical seabirds are pushing further south. This initial rich increase in some species as they adapt could result in pressure on others as competition for food increases.

While Australian plants and wildlife have adapted to change before and suffered extinction, the report finds the scale of changes from global warming are "unprecedented in their nature and rate [and] they may be outside any evolutionary coping range of many species".

Media release and links to the full report are here.

LARGE BLACK PARASITES CRY OUT - TO BE SAVED!

This article was originally published in EcoInformationSource 2002

All along the eastern seaboard of Australia a large black flying parasite can sometimes be heard crying out with deafening squawks reverberating around craggy cliffs. However, this magnificent creature is less commonly seen feeding on its helpless host. Not often referred to as a parasite, the Glossy Black Cockatoo (eastern subspecies) in South East Queensland must feed off either of two plant species to survive. A parasite is an organism that must feed exclusively off another organism to continue to exist.

The Glossy Black Cockatoo feeds for 6-7 hours a day exclusively on the very hard seeds of Sheoak trees. Surely they must feed on other stuff as well you ask? Well, it appears that the habit of the Glossy Black Cockatoo to chew bark, wood or fruits of gum trees (like other cockatoos) has been mistaken for feeding. All the studies to date show that it is just a thing they do and is not feeding. During the nesting season a division of labour agreement operates between the two partners. The female lays and incubates the eggs most of the time while the male partner feeds himself and then regurgitates food for the female. Good job they are close! Usually partners for life in fact. So the Glossy Black Cockatoo is effectively a mobile yet noisy parasite of the Sheoaks.